A new update of the Reality Expansion Pack for X-Plane is here to stay. We did a lot of work for this update and really it is a leap forward from older versions, especially on the engine side.

This update targets all the current REP airplanes for both X-Plane 10 and 11. You get it for free. Just go to the store and download the package again to get the latest avilable version of it.

REP 3.3 has introduced a new engine model for the big bore engines such the Continental IO-550 but left the Cessna 172 IO-360 unchanged.

REP 3.4 introduces a lot of new improvements and completely rewrites the C172 Lycoming IO-360 engine. Since the SuperCub Continental Titan X is basically an IO-360, the same updates applies to it as well (the ASDG SuperCub already ships with REP 3.4).

The new engine models have no strings attached to the default engine model that ships with X-Plane. That is, the logic behind the engine is not depending on X-Plane anymore. We get some good side effects: 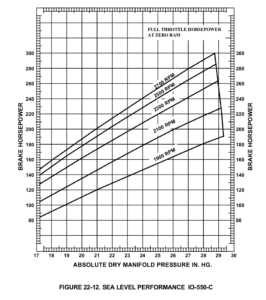 The new engine model introduced in version 3.3 turned out to be much more precise that expected. We were able to put in it a lot of data for each engine we model. For example, the graph aside describes the power output of the Continental IO-550 related to RPM and MAP. You get the very same curves inside REP. That is, the power output is perfectly matching reality. If power output does so, so does the fuel flow and the CHT, the oil temperature and all other parameters.

Complete control of the engine model means that we can simulate advanced behaviors that are specific to a given manufacturer.

For example, Continental fuel injection system is a continuous flow one. Turning on the fuel pump provides more fuel to the engine thus enriching the mixture. That is, if you’re already running rich you will get a lower EGT and a lower power output. If you’re running lean, you might get a higher EGT and more horsepower.
The same does not happen with the Lycoming IO-360.

Another trick we finally introduced is related to the fuel lines. When you turn the fuel selector switch to off, the engine takes few seconds to die on you because the fuel lines need some time to dry out. This means that you can finally drag that fuel selector handle with no worries at all!

In REP 3.4 we started some work on the flight model too. Mainly we worked on the stall behavior of the default Cessna 172.

The rudder and elevator authority are improved to the point that we you can finally spin the Skyhawk like in real life!

The results of this upgrade to the default flight model will be used on the other airplanes as well. The next airplane that will get advantage of this will be the Cessna Centurion in the next REP version.

Starting from this release, REP will use the new detachable windows introduced with X-Plane 11. This means that you can detach them from X-Plane window and drag them to a second screen if needed.

Don’t worry if you’re using X-Plane 10. If that’s the case, REP will draw the usual windows that you already know very well, mimicking the nice graphics of X-Plane 11.

X-Plane 11.20 provides native Virtual Reality support. That is, we can use X-Plane SDK to draw windows in VR.

This work is still in progress and we’re currently providing experimental support for it. Some things are not yet working as expected but our plan is to improve them as soon as more tools are available on our side.

Here’s a picture of what you should expect from this update.

To make the Reality Expansion Pack even more future proof, we improved the installer. This is something completely opaque to the users. That is, you should not see any change on your side. The actual update is under the hood, especially when it comes to FMOD *.snd files that we need to edit when REP is installed in your aircraft.

Bottomline, if Laminar or Carenado decides to update their aircrafts, REP should not need a new update to be compatibile with them!

There are tons of minor fixes in here. Some of them are: