It’s some time that we do not provide any “official” news to the public about our work behind the scenes.
Well…we have been very busy developing and testing what I think is the most interesting major update of the Reality Expansion Pack so far.

This is a leap forward to a seamless integration with XP11. In addition, this version adds new features! Of course, this update targets the Cessna Centurion, the Bonanzas F33A & V35B and the Baron B58.

I’m among those ones that didn’t like the user interface of REP v1 and v2.
At the time of its implementation, we had to choose between developing “under the hood” features or work on a nice user interface. As we usually prefer substance over style, we decided to work hard on flight dynamics and maintenance features while leaving behind the graphics for a while.

Now, after 2 years since the release of the Reality Expansion Pack 1.0, it was time for new graphics! 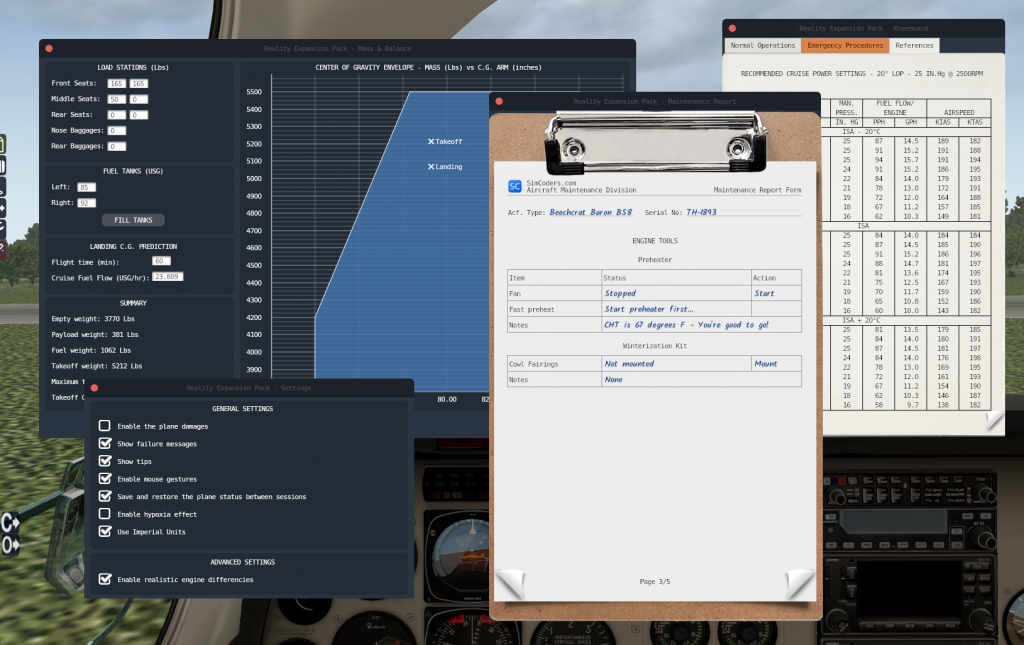 There are many improvements in the user interface:

This is meant to help the new users that are not yet accustomed with the advanced systems of REP.
By cliking the “magic wand” button in the lateral menu you get two things:

In this way, you get out of trouble if your engine is flooded or vapor-locked. Furthermore, this is a good way to learn more about the correct start up procedure.

A bug in X-Plane 11 caused REP to not recognize some joystick axes such the mixture or the propeller handles.
After being in contact with Laminar we found what the problem was. Eventually we found a work around. REP 3.0 contains that fix so finally your Saitek TQ should work as expected in X-Plane 11!

There are some minor improvements that affects only some aircrafts.
The default Carenado implementation of the Flight director in the F33A is broken. REP 3.0 tries to fix the problem.
Moreover, this new version corrects the excessive fuel flow of the V35B in X-Plane 11.

As usual, this update is free of charge for the current users.
Just download your favourite REP packages from the store and replace the current version with the new one in your aircraft “plugins” folder.