After the Cessna 210 Centurion and the F33A Bonanza it’s now the time of the V35B Bonanza.

In this post we’re gonna check out the new features of both the V35B and the new REP 2.4.

The new REP for the V35B brings X-Plane to a new level, again. We did a lot of work over the default (already beatiful) airplane by Carenado.

The default flight dynamics are replaced by custom files and algorithms, as we did for previous aircrafts. Now the airplane handles realistically both on ground and in the air.

On the ground, a custom landing gear makes it roll like the real one.

We are really proud of our on-board systems simulations. The piston engine that REP brought to X-Plane is the most realistic one, so far.

With this new version, both the damages and the maintenance systems are improved. This time we focused on spark plugs fouling and on Rich Of Peak/Lean Of Peak operations (we’ll cover them both in two new how-tos very soon). This is, again, something that was never seen before in X-Plane and that we bring in for the first time. 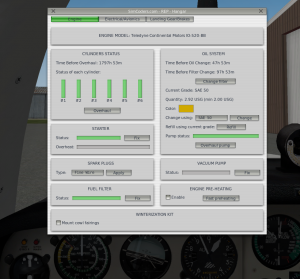 Long story short, make sure you use the mixture in the right way or you may foul the spark plugs or, worse, damage the engine in the long term.

Now, this is the most interesting point. At least to me 🙂

We managed to simulate the real Osborne tip-tanks into X-Plane by coding the correct behavior and adding new 3D objects to the cockpit.

Many real world V35B have been modified by J.L. Osborne Inc. (http://www.jlosborne.com) by adding a 20 US Gal tank to each wing tip.

An Osborne upgraded V35B receives an Increased Gross Weight STC (Supplemental Type Certificate recognized by FAA/EASA) to 3600 pounds, that is, you can load your V35B up to 3600 pounds instead of 3400.

Once the tip tanks are activated using the Carenado’s 2D panel, the STC is applied and the Weight and Balance section is updated accordingly. The airplane behavior will change too: it will feel more sluggish, especially on the roll axis.

The electric pumps are operated using the custom switches that we placed in the cockpit near the digital fuel flow indicator. 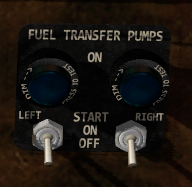 When turned on, the electric pumps move the fuel from the wing tip to the main tank.

Like the other REP airplanes, the V35B features our custom interactive walk around and pre-flight checks. You can set or remove the tie-downs, the chocks, check the control surfaces, the tires and so on.

Also, the weight and balance window that you already know applies to the V35B too.

You get the custom kneboard as well, with all the checklists, emergency procedures and reference tables (in a printable copy too).

With REP 2.4 (that will be published for the F33A and the C210 very soon) you get all the new stuff mentioned above.

As I said before, for the first time spark plugs fouling has been introduced to X-Plane.

You’ll have to keep a minimum RPMs on the ground and to lean aggressively to avoid spark plugs fouling.

You can now choose to use the default spark plugs or the fine-wire ones. The fine-wire spark plugs are less prone to foul due to carbon deposits and let you misbehave a little bit more.

LOP and ROP now makes the difference in X-Plane

How many of you never cared about mixture leaning in X-Plane? Now it’s time to begin to make a difference between ROP and LOP.

Behind this topic there’s a vast universe. For sure, the most complete and interesting article about it is this: http://www.avweb.com/news/savvyaviator/savvy_aviator_59_egt_cht_and_leaning-198162-1.html

In a practical manner, you are allowed to fly both rich of peak and lean of peak but, depending on power and on how much ROP/LOP you are, you may damage the engine in the long term.

The in-flight tips will help you in learning when you can and when you cannot lean the engine during flight.

As you can see, every release of the Reality Expansion Pack brings some new thrills and some new reason for learning new things every day. Fun! Right?

Do you have any suggestions or questions? You find us right on our FB group: Reality Expansion Pack Pilots.

The Reality Expansion Pack for the V35B Bonanza has been released