In this post we will talk about mineral oils for our airplane engine. How should you take care of oil with the Reality Expansion Pack?

This is a long topic so we’re gonna walk through a series of questions that will end with the most important: which oil should you choose for your engine?

Why there’s an oil system?

How does it work?

The oil system is rather simple. There are:

Why and how must you check the oil before every flight?

You must check the oil for two main reasons:

So, the point of checking the oil is to make sure that you have the right amount of oil in the sump and that the oil is clean enough to provide correct lubrication. To check if the oil is clean you don’t need to check the filter but just the oil color. An amber oil is a clean one. If the oil gets too dark, then it’s time to get it changed.

To check the oil in REP, just open the maintenance window. You find the oil system data in the first tab, at the window’s right-hand side. 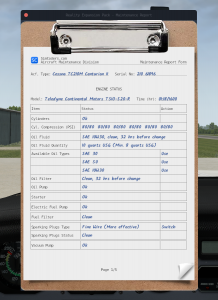 When should you change the oil?

The decision of changing the oil is taken on the points described in the paragraph above. If the oil is too dirt it’s time to change it all. If the oil quantity is low, a simple refill will do the job.

But there’s another parameter to keep in mind for the oilg change: time since the last change. Usually, every 50 hours (depending on the plane’s manual) an oil change is mandatory, even if the oil “looks good”.

When the oil is changed, the filter is opened, checked for metal filings in it (that would indicate an engine problem) and then replaced with a new one.

How can you identify different types of oil?

To classify an oil you can pick many of its properties but the most significative is its viscosity.

The viscosity is the oil resistance to flow and shear. The higher the viscosity, the less the oil will flow.

The oil viscosity is not constant but it changes with temperature. The higher the oil temperature, the lower is its viscosity.

SAE has classified the motor oils basing on their viscosity, assigning to each oil a grade that is known as SAE grade. A grade is basically a number that indicates the viscosity of an oil and 210°F (or 100°C). That temperature was chosen because it is the temperature at which an engine usually operates. The higher the number, the higher the oil viscosity. For example, a SAE30 oil will have an higher viscosity than a SAE15.

Motor oils are divided in two big families: the single-grades and the multi-grades.

A single grade oil such SAE30 is an oil that is identified only by its viscosity at 210°F. Viscosity is graded by measuring the time it takes for a standard amount of oil to flow through a standard orifice, at standard temperatures. The longer it takes, the higher the viscosity and thus higher SAE code. Single grades oils with high viscosity are not performing well on winter because they are not flowing well at startup, when the oil and the engine are cold, thus making the engine run “dry”. If an engine runs dry, it is more exposed to wear.

To solve this problem, multi-grade oils were invented.

Which oil should you choose for your engine?

Now you have all the informations you need!

First, every Pilot Operating Handbook reports which oils are good for the engine in use.

Both the Cessna 210 and the Bonanza are equipped with the TCM IO-520. This engine is recommended to be lubricated using SAE50 above 4°C and SAE30 or SAE10W30 below 4°C. Keep in mind that the given temperature is the one of the cold engine, so you choose the oil basing on the engine temperature before startup.

The choice is pretty straightforward. Basically, during spring/summer go for the SAE50 (a thick oil). When fall comes, switch to SAE20/30 or, better, SAE10W30/20W50 (thinner oils).

How-To: Choose the right oil for your engine