This is almost an usual appointment: a new upgrade of the Reality Expansion Pack to bring new features to our beloved X-Plane.

As always, this is a free upgrade for all our current customers. To get it, just download again the package from the store where you bought it at first place.

To let you easily understand all these changes, let’s compare the old and the new Engine Maintenance Windows. First you find the old one, then the new one. 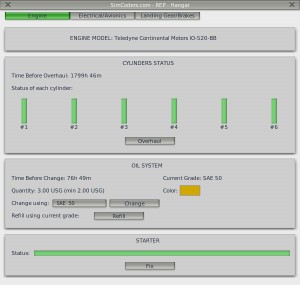 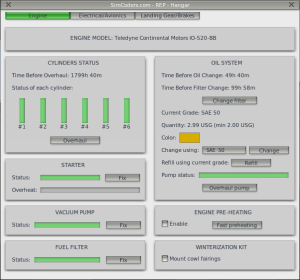 The more the cowl flaps are open, the more drag they induce. This was an old idea that finally we had the time to implement. This change will likely affect your cruise speed in hot weather, when you need to keep the cowl flaps a little open.

Yes, we know. X-Plane already had the hypoxia effect. But let’s be honest: it was not that realistic!

Now you get a realistic tunnel vision and the sounds of hard breathing. The more you stay up there (above 12000-13000ft), the more the effect will be intense. The only way you have to avoid it, is to descend to a lower altitude or to turn on the oxygen system (Cessna 210 only).

To know more and see a video preview, here’s the post about hypoxia that we published yesterday: http://www.simcoders.com/2016/04/13/realistic-hypoxia-effect-coming-v2-3/

Do you have any comment or idea for future upgrades? Let us know on our Facebook page or in the Reality Expansion Pack Pilots group