In the last months many of you wrote an email to ask why with REP the flaps motor sound is not audible when the engine is on. That’s actually a feature.
On the real airplane the electric flaps motor is not that noisy and also it’s placed more than one meter behind the pilot. That means that you won’t hear it at all when the engine is running, especially during takeoff, when the engine is at full power.
Also, unless you operate the flaps above the white arc (which means above the maximum flaps operating speed) you won’t get any kind of feedback like g-forces, vibrations or whatever.
Usually, the flaps position indicator is not helping much, mainly because it’ very small and not in direct sight with other instruments. If you’re operating the flaps it means that you’re in a critical phase of your flight (either landing or taking off) so you really don’t want to move your eyes from the runway to that small indicator in the far side of the panel.
So, how should one make sure that the flaps are at the desired position? 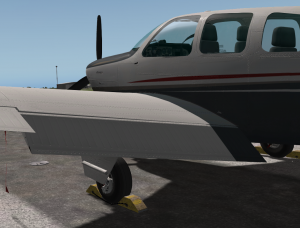 This one is super easy. Just turn back and check that both flaps are in the expected position.
Before takeoff set the flaps to the takeoff position and then check that they are correctly working and set.

This one is more challenging and requires you to know the airplane you’re flying.
Always operate the on-board systems keeping in mind what to expect from every operation.
Let’s say you takeoff with 10° flaps. After rotation you accelerate to Vy and at 300 feet AGL you raise the flaps to 0°. What should you expect? Should you base your next decisions on the sounds you hear? No!
Raising the flaps reduces the lift and the drag produced by the wings. The airspeed should increase and the vertical speed should temporarily decrease. If you want to maintain Vy, you must pitch up. This is the best confirmation you would ever desire that the flaps did work properly. No special sounds, no vibrations or whatsoever. Just a change in the plane parameters.
And what’s even better is that the change is confirmed by two instruments, one primary (the airspeed indicator) and the other secondary (the vertical speed indicator).
During landing, when you start lowering the flaps, look for the same change in the flight parameters. When you lower the flaps you should expect a decreasing airspeed and a temporary increase of the vertical airspeed. If this change is not happening, you should either go around or prepare for a 0° flaps landing (which is not a big deal if you’re not doing a short field landing).

Also remember that this same rule can be applied to the landing gear. When operating the gear it’s mandatory to check the gear indicator lights but the first feedback is always given by a change in the drag that cause a change in the airspeed.

PS: Do you have more questions about flaps or want us to write about some other system of REP? Feel free to contact us on facebook.

All you want to know about REP’s flaps implementation