We are going to expand the REP saga to the Carenado’s F33A Bonanza. Why the Bonanza instead of the Baron, the C337, the brand new T182T or any other airplane?
The choice for us was straightforward. You’ll find out that using them both in X-Plane will teach you many things about real world flying. Here’s why.

The Centurion and the Bonanza have (almost) the same engine

The Centurion flies like a truck, the Bonanza is a Cadillac

The Centurion is a heavy high wing and it feels heavy. We managed to simulate this heaviness so you, the pilot, can feel the weight of the airplane while flying in X-Plane.
The Bonanza, despite being in the same category, is a low wing that feels very light on controls, both on pitch and on roll axis.
This shows that no airplane is like another. They are all different. And the C210 and the Bo are not an exception despite having the same engine and almost the same maximum weight.

The Centurion hauls your John Deere tractor, the Bonanza doesn’t

The C210 is well known to be a super hauler. You can fit everything in it, pack six people on-board with baggages, full fuel and still be under the MTOW. Also, its CG falls right in the middle of the fuel tanks, so burning fuel doesn’t move it.
The Bonanza is different. You can pack four people and baggages only by sacrifying fuel. Also, the CG will move aft while burning fuel. If you don’t accurately load the F33 before flight you may get a CG out of limits during flight.

The Centurion landing gear is made out of crystal, the Bonanza’s is the toughest in the market

Many owners have had issues with the Centurion’s landing gear, especially if they still have the gear doors. You can’t use it as aribrake, you can’t lower or raise it while turning (to not bend the gear doors). Also, it is a maintenance nightmare.
When the first Bonanza came out it was the late 40s, there was a small number of paved runways and many pilots operated the Bo out of 1000′ grass runways. It was made to last! Its landing gear can make it land on a carrier.

The Centurion’s engine runs oversquare, the Bonanza’s does not

For the first time in X-Plane’s history you’re going to pay attention to your RPM/MAP settings.
With REP 2.0 we’re going to introduce a new set of damages, and the oversquare engine setting will be allowed (at low power) on the Turbo TSIO-520 but not in the non-turbo IO-520.
The turbo version of the IO-520 has, in fact, a lower compression ratio (7,5:1) than its non-turbo counterpart (8,5:1). This means that it was designed to work with higher MAPs. With the T210 it is common to run at 25” MAP and 2200 RPM for the entire cruise!
The non turbo version, instead, wants you to strictly adhere to the rule that says that the MAP should be equal or lower than RPM/100. Take a look to the following chart from the Bo’s POH. REP 2.0 simulates this! 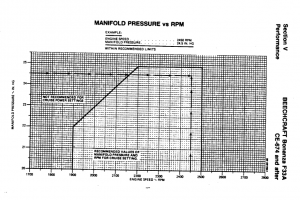 So, reassuming, on the T210 go oversquare, on the Bo go undersquare.

Which airplane is better?

This question is usually the one that starts flames on the forums. They are both beautiful, powerful, reliable when well maintained and a joy to fly! They are just……different!

One thought on “F33A Bonanza Vs T210 Centurion”