We have been busy for a while, doing tons of homeworks. We are still coding, modelling and drawing but there’s already much to show!

There are so many new things coming that 1.1 (or worse, 1.0.3) wouldn’t be fair for both us and you pilots.
Some major things are changed under the hood and other are clearly new so why bother with 1.xx versions?

The pre (and post!) flight procedures can now be simulated with an interactive walkaround. You can check the tires, the flaps, the ailerons, set or remove the chocks and the tiedowns and so on. Remember to remove the pitot cover or your Airspeed Indicator won’t work…and no, you can’t remove it while flying! 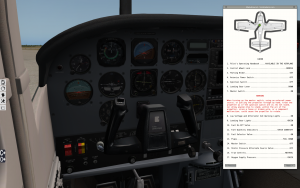 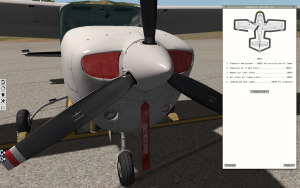 The entire walkaround resembles the procedures indicated in the manuals plus some extras that give you informations about some of the plane’s systems.

Since X-Bookmark is a very nice plugin that put your airplane exactly where you left it, wouldn’t it be cool towing your aiplane in and out of your hangar at every flight?

Now you can. Check the screen below! 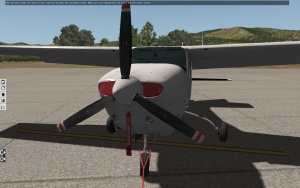 Our current engine simulation is surely the most advanced in X-Plane but we won’t stop here. Just yesterday we managed to recreate a very realistic spoolup for pistons. I’m proud of it. It’s a small thing but it changes the feeling that you have at startup, once again!

Also, the damages and failures are under a major restyling. For example, the oversquare operations will be more tricky on a non-turbo engine such the IO-520-BB.

Why the IO-520-BB? Because it powers the Bonanza!

They call it the Cadillac of the sky. It feels huge on the ground and light when flying. It’s fast and easy to fly. It’s built like a tank and it’s the only GA that is certified int he utility category even at full weight! 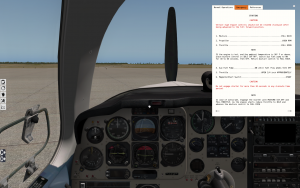 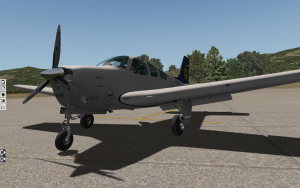 It’s fun to make REP for the Bo. We are learning tons of new things. If you want to study while waiting for REP to be ready for the F33 by Carenado, check out the BeechTalk community and subscribe to their newsletter. There are literally thousands of interesting posts about flying, owning and mantaining a Bonanza.