We are very excited to announce that SimCoders.com has started a partnership with canadian AeroSim Gaming to develop the systems of their Piper PA-18 Super Cub.

Head of AeroSim Gaming is Alan Shafto, who actively took part to the Reality Expansion Pack for Carenado’s B58 beta testing.

Alan is an aviation engineer and a pilot. In addition, he’s helped by EvilNando who is doing the 3D model and is a Bombardier Q200/Q400 pilot. 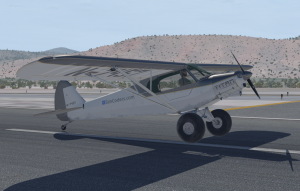 The Super Cub is a very famous two-places, high wing, single engine plane based on the Piper J3 Cub.

It has very peculiar characteristics:

The 3D model ASDG is working on is amazing. It looks marvelous on X-Plane 11 as well on X-Plane 10. 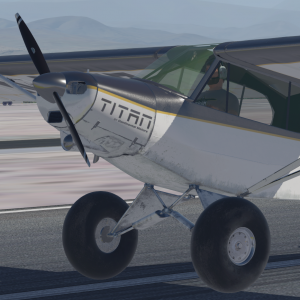 The Reality Expansion Pack will be part of the Super Cub package. That is, all the things you saw in the packages for the Centurion, the Bonanza and the Baron will be natively provided to the Super Cub.
You got it right: natively! No need to install REP over the Super Cub as they will be provided together.

First of all, let’s talk about the engine.
There will be more engine options. We will create a simulation of the Titan engine used on the experimental Super Cubs. It will come in 160HP and 180HP variants. This engine use a different fuel injection system that the one simulated in the previous REPs. This is a great challenge for us but we’re ready to take it!
We’re working on the official engine data provided by Continental Motors, coding it into REP’s configuration.
We will improve REP’s classic hangar view to provide you the information you need about these brand new engines.

Then, REP will provide the support for the mass and balance calculator, the towing, the walkaround, the failures, the in-flight tips and the systems management that you already know very well.

Of course, you’ll feel the touch of REP over the flight dynamics too, even though the base flight model is already very much realistic.

When will it be released?

The aircraft will be ready pretty soon. Due to the fact that we don’t want to rush, we do not have a release date yet.
It’s a matter of polishing things up and make sure that the flight model and the systems are working as they should.

Now we have to work hard to finish things up and release another great airplane to you guys! 🙂

AeroSim Gaming and SimCoders.com together for the Piper Super Cub

One thought on “AeroSim Gaming and SimCoders.com together for the Piper Super Cub”