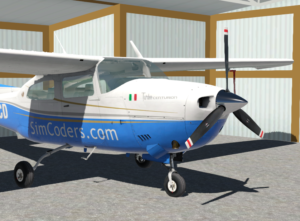 We worked on this update for a few weeks while we received feedbacks from you guys.
The Reality Expansion Pack is now better than ever.

The update is free for all the current users and is available at the X-Plane.org store. Just download the package again to get the latest available version.

The update is available for the older packages too, such the Cessna 210 and the Beech B58 Baron for X-Plane 10.

Fixed windows in XP10: under X-Plane 10 some windows were not rendered correctly after upgrading to the new SDK.

Improved Mac OS compatibility: Since v11.20, X-Plane requires plugins to use different libraries than before. We upgraded REP accordingly. If you don’t see any change in REP, we did a good job!

Engines improvements: there are some fixes here and there.

More menu entries: REP’s plugins menu now contains new entries that do the same things that you can do with the sidebar menu icons. We received this request from many users using more than one screen. We heard you guys.

Mouse gestures are gone: Since REP 1.0, many users did not understand how to use the mouse gestures to open the kneeboard. We received many complaints during the years. In the end we decided to remove them.

What are you waiting for? Just grab your update! 🙂

PS: REP for the new Carenado F33A Bonanza for X-Plane 11 is on its way. It’s a matter of very few days!